Hi people,, long time since I blogged… U know its holiday time and I hardly stay at home. June 6th was a Saturday and my last exam happened to fall on that day. The very afternoon, before even I could smell the holiday mood, I was carried (literally pushed into the car) to T-Nagar for shopping. I wasn’t in a mood for it as I lost my sleep for the previous 36 hours. Though I reluctantly joined them, shopping went on pretty well. We reached home so late that I din even have time to glance at the clock and fast I fell asleep. 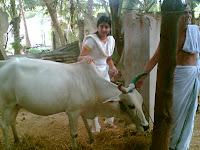 Early the next morning I had to start for a village visit. WE took a van to move there with most of my cousins and maternal relatives. Perumbedu was awesome and green everywhere I could see. I felt I was born new on earth breathing oxygen for the first time. Fields around reminded me of Bharadhiraja’s movies which was the only way I had visited villages before in life. The village had hardly any vehicles moving around and you cant blame the people for that as the village covered 5 to 6 streets only to my knowledge. 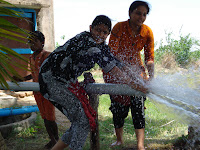 All the temples were open for the people to go pray. Some didn’t even have the pandit inside though there were few valuables. That showed how much the villagers trusted each other and how trust worthy people must have been living. When we distributed the prasadham we could realize the unity among them. “Unity” was one the word forgotten in the midst of the cloud of materialistic city life. 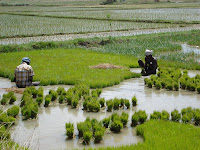 It was almost noon when I went out to see the fields and I had the chance to enjoy the cool water that splashed out of the pump set. There were 2 farmers who didn’t even bother about anything that was going around, we people made hella lotta noise, the sun heated us completely, they were even drenched with sweat. They were so very dedicated to their work. They were cutting the grass like grain seeds one by one. When enquired they said they had done the same to the field that was to the limit of visibility all alone just because they didn’t wish to spend the profit as wages to others working on their farm. That showed how much each penny mean to them. Lunch, few hours of talk with our relatives there, jokes, smiles laughter and finally evening tea ended our session there. 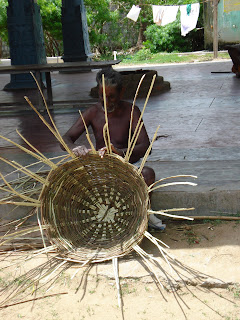 There was another uncle who was doing his work in a corner. did'nt even bother what was going on as his world was his work.

There was one uncle who told us about a scary creature that roamed in the village at late nights. He claimed to have seen them calling them “Kutty Chathans”. It seems these creatures have monkey like arms, no bones, they look dark black and they are short. Importantly he said their blood, unlike us, is black in colour. When asked how he knew this secret about its blood’s nature he said he had cut one of its arms and put it under a basket. The creature had cried for getting its arm back and finally ran away with it.

We didn’t know weather to believe him or not, but soon before we could start thinking our van left the place.