Mukul Deva is the best known Indian Army thriller writer. He is from La Martiniere College, Lucknow the National Defence Academy, Pune, and the Indian Military Academy, Dehra Dun. After his army service he entered the corporate world. Finally he reached the destination that was best for him, writing. Being from the military background himself, we can expect high amount of patriotism, the military fire and lot of original facts about the army in his books. Every scene could be inspired from something that really happened either to him or his friends. We could also expect the true emotions of a soldier. 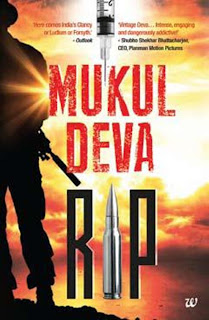 The cover image keeps us thinking about the story. The silhouette of a solder standing bold and strong to defend the country, makes it clear that the story has a very patriotic war flavor. And with the name RIP we assume it to be a tribute to a martyr. Usually we assume a soldier’s story to be a war against Terrorist, don’t we? But Mukul Deva has something to surprise us in the story.

The story revolves around K-Team, a team of ex-special Forces officers, headed by Colonel Krishna Athawale. R.I.P doesn’t stand for Rest in peace for a martyr but for Resurgent Indian Patriots.
Their mission of disinfecting the country starts with three well-known faces who were politicians and businessmen. They were all corrupted and were on news for the same. The story takes a turn when we slowly realize that this is just a part of the planned list of germs that were going to be removed by RIP.
The CBI investigations and the K-Team’s moves make the book a really interesting one. A CBI officer Vinos and a commander Rajath try to catch the K Team. Vinod does it as he is a CBI officer but Rajath does it for money.

Bringing up the real scams with fictitious names makes it more realistic and interesting to read.
Mukul has managed the needed emotions well. He understands the pulse of readers and hence made a wise choice in including little bit of love in the book. Reena wife of Raghav and a TV host gives a nice romantic flavor to the plot. Krishna and Reena meet and they twist the story from there.
The pace, heroism, interesting events woven and the thrilling screenplay makes us visualize it as a movie. It is a pakka movie making.

I was little confused due to parallel narration of characters. The K Team making it through everything like heros and not getting hurt is a little hero like. That could be one other reason to make this movie into a movie, hero based subject.

In short, the book can be an outburst of anger that is still sleeping within each one of us looking at where the country is going with scams and corruptions.

In a country like India, full of news about scams every other month, the book is a delight to read and a hope to happen really.

This review is a part of the Book Reviews Program at BlogAdda.com . Participate now to get free books!