This is a story of two couples. Priya- Raj and Kareena-Gautham. 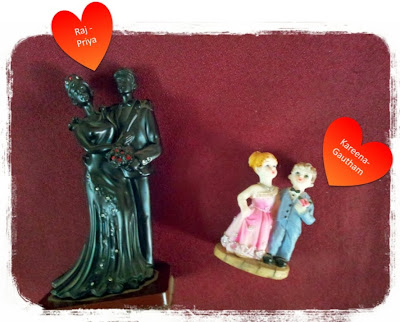 “Mom, I seriously don’t understand how you and dad never had these problems. I am just not able to tolerate Gautham.” Kareena, my daughter, said to me.
“What’s wrong with you guys?” I asked.

“There were days he used to wait for hours together just to look at me from a distance, take risks to surprise me at 12 on my birthday. But he has changed a lot. He used to tell me how he longed to get a call from me before he had proposed.” She said.

“Before proposal, he longed to get a call from me. After I said yes, he spoke for hours together. Slowly, after we told everyone that we are in a relationship, he reduced the number of hours over phone. The surprises he used to give me went down and even the way he used to go out of his way to impress me was lost. And when everything went on smooth and both the parents were ok with the relationship he started acting so weird. He spoke as if he should have never fallen in love and it was too early for marriage. I had to convince him for the engagement. And after engagement all the love was lost. He never picked my calls, he gave a busy picture always. He was in office for more time than before. He never took me out. Now I am scared that this will continue after marriage. Yours is a love marriage, mom. Dad takes care of you like an angel, doesn’t he? So I doubt if Gautham truly loves me.” She said.

“Gautham truly loves you. You guys make a wonderful pair.” I said.

“No mom. Can’t you see how it is? Initially he tried so hard to impress me to make sure I become his girlfriend. After telling friends he was sure I wouldn’t leave him and go away, so he reduced the drama a bit. Later when it was nearing engagement he did not even bother to take interest and even did not want to have the engagement because he just wanted to love and not take responsibilities or commitment. People never understand the importance of something if they get it easily. Now he is sure that I am going to marry him and only him, I am all his, and that’s why he doesn’t bother to impress me or even talk to me.” She said weeping.

“Wait. Wipe your tears. Come with me.” I took her to our room. I pulled a chair and asked her to open the loft door. I asked her to pull out an old wooden box. We sat in the balcony and I started narrating the story.

“Dad and I met at work. The first day I saw your dad, I fell for him. He was so smart, tall and handsome. But I never knew all that would turn into a life time love story. I used to go to office just to look at him from a distance. His desk was just a few steps away from mine. From my desk, I would be able to see only the foot and the hair of your dad. But anything was good for me and I used to watch just the foot and the hair for hours together. I never realized that your dad was watching me too. Days passed and we started talking, chatting, messaging and meeting. It grew into love and we knew it. One fine day your dad took me out and proposed to me. Then came the same story as yours. Calls reduced, impressing acts reduced. Engagement happened for which I had to convince your dad. Every romantic stuff stopped in life by the time we got engaged. I used to cry like you until your dad told me his side of truth.” I smiled.
“What was it mom?” she was curious.

“But how does it make a difference if I am a wife or a girlfriend. Isn’t love the same always?” she asked.

“Before the marriage got fixed and when you guys went out who paid for stuffs you buy?” I asked.

“When it’s a gift he did. Otherwise I bought my own stuff.” She said.

“After marriage, he will have to spend for all that you buy. It’s just not about buying stuffs. I hope you get what I say.” I said.
“Did things get better after marriage?” she asked with a smile for the first time in the conversation.

“Things got worse.” I said.

“What? How? Why?” she was surprised to know something had gone wrong between me and Raj. Everyone called us the ideal couple.

“I never complained that he became less romantic or super busy after engagement after he made me understand how a guy feels responsible. After all he was sacrificing his early twenties bachelor life for me. Poor guy. Things took a U turn after marriage. Before we could realize what had happened to us, we had you in our hands. We had to work hard to make your life better. We kept running in the race of the world to earn enough. You know how it is, how much ever you earn, it isn’t enough always. We never said ‘Love you’ anymore. It just didn’t occur to us in our busy lives. We had stopped going to movies. Stopped pulling each other’s legs. The fun in life had been paused. Mark it, it was PAUSED not STOPPED. In our race, the LOVE was lost.” Tears rolled down my cheek.

“Our work timings changed and we hardly had time to meet each other and talk. Your dad always forgets most important stuffs like placing the curd in fridge, or switching off the A/C. We couldn’t afford to waste money on electricity bills or wastage of food at that time. So I started writing and sticking notes for him everyday.” 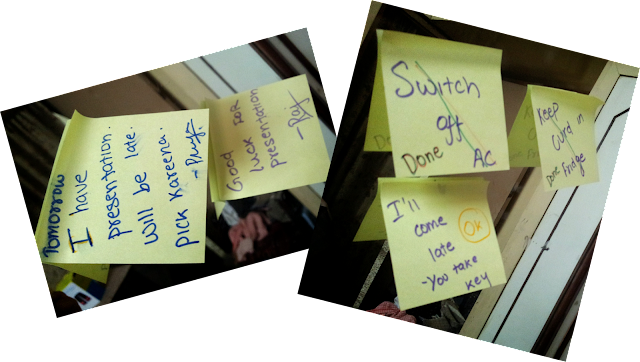 “Few days passed and all that we communicated was through the sticky notes. We had started communicated more than before. A day dawned and that was the same day 3 years before we had got married. Yes, it was our anniversary.” 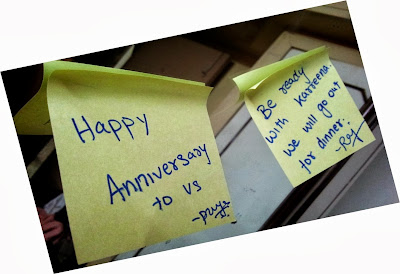 “That night we had gone to a restaurant. You were 2 and half years old back then. We had never gone to restaurants unless we had to after you were born, till then. It was weird and kind of new or something I had lost touch with; sitting opposite to your dad at a restaurant without any hurry to go somewhere in time. I got used to the boring routine of life and I did not know how to react that day. I was quiet and kept staring at the menu card. Your dad had vanished into a door in the restaurant hall. When he came back I was still staring at the menu card.

He did not talk a word but he looked tensed. In so many years I could understand what his mood was just looking at him. I understood he was hiding something.

‘Can you remove our wedding ring?’ he asked. I was so tensed. Tears rolled down my cheeks. I couldn’t contain my tears in my eyes anymore. ‘Was it going to break?’ I thought to myself. I looked at you and started worrying about your future. I did not speak a word; I removed our marriage ring and placed it on the table.

Suddenly I realized that there was a big cake on our table. He was smiling at me. The cake read ‘Will you marry me again?’

It was the same way he had proposed to me first, years ago. I still remember him explaining why he had written ‘AGAIN’ in the cake when he had proposed to me. He had said that we were already married in his dreams and thoughts. It was so impressive.  'Third time?' I asked. He nodded.

I was so impressed. I had tears in my eyes and I nodded with a smile. He picked our marriage ring and said

‘Look how dirty and dull this gold ring has become. For a busy woman like you, who doesn’t have enough time to maintain the jeweler or doesn’t give a damn to clean it, Platinum is the best. So much maintenance isn’t required for platinum. This won’t get dull for a life time.’

I understood that he was talking about our love and not the metal. He assured that our love will never become dull ever again in life.
He went on his knees and slid the ring into my finger. That was our Platinum day of love.” I said.


"That night we had written the last sticky notes." 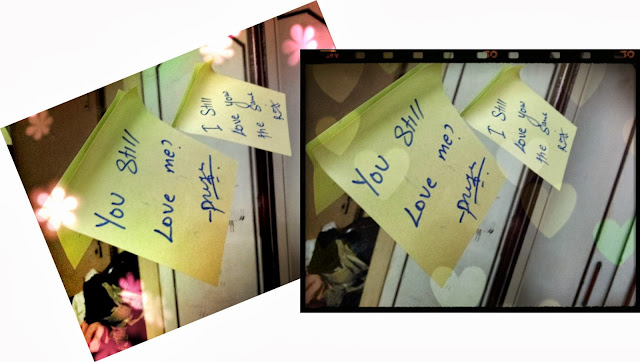 “So if Gautham gets me a platinum ring will things be ok?” She asked.

I realized that maturity comes with time and understanding needs personal experience and not story.
“Leave it to time Kareena.  Just remember one thing, marriages can never fail if you don’t fail to communicate. The more you share the stronger a relationship becomes. We had failed to communicate the love we had for each other and that is when we felt lost. But when we started communicating it again, love was back and never left us.”

“I understand mom.” She said and vanished into the house. I enjoyed the rest of the evening reading the notes that we had preserved in the wooden box.

After few minutes I heard her talking to Gautham ‘Why had you never gifted me a platinum ring?’
Girls never understand from other’s love story. They only believe and understand from their own. My daughter will soon learn love.

This post is written as a part of Platinum Day of Love contest hosted by indiblogger.in.
Contest page: http://www.indiblogger.in/topic.php?topic=90
scribbled by Ganga Bharani (GB) - October 19, 2013