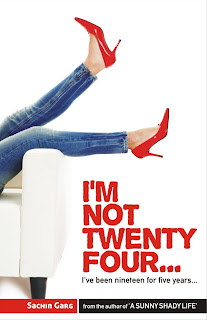 This is the first book written by Sachin Garg. The author says that there are two kinds of stories. One, you relate to it easily, the other, you find it hard to believe. This is the second kind. When I picked up this book I had just 2-3 days left for me to start with my career. Since the story also has a similar start I loved reading it.

The story revolves around a girl named Soumya Kapoor. She gets placed in campus interview and is posted in a small village named Toranagallu with a short notice. She gets upset but has no option but to leave the most happening city and head towards Toranagallu. A geek college mate of hers also gets his posting in the same village. But that only adds to her miseries as she hates him. She spends the very few days she has shopping with family and her close friend Vernita.

The moment she enters the house alloted for her, he jaw drops open. The house had everything that a room in five star hotel would have. She calls her close friend Vernita and  She is told that another traineebe joining. She gets excited. She meets him and they become friends.  Soumya is mistook to be a male and is assigned a profile met for guys. Accident management profile. The first accident that she witnesses freaks her out and she plans to quit the job forever. But later she bravely attempts to take it up.

The other new trainee becomes a good friend. She meets a guy named Shubro whom she develops a crush on. They travel together around the place. Later he leaves to a nearby town. One morning she is called by her head to attend an accident as usual. The case deals with a worker being pushed into the hot tunnel by his irritated boss. The guy gets melted in the tunnel and they get not a bit of him. Later she gets to know that it was her friend who was thrown into the hot tunnel. She finally makes her mind to quit the job. She intimates her head and plans to remain in the village till the notice period gets over.
The rest of the book deals with how she gets along with Shubro. She wait for him to feel it for her and ask her out. Finally, the day  before he leaves the village he tells her how much he loved her. The next morning when she wakes up he was already gone. He had vacated the room. That was the last day of her notice period too. The last few pages of the book beautifully unfolds the suspense behind the activities of Shubro. The ending of the book is quite surprising.

I loved reading the book though it took me quite sometime to finish it. A page-turner in short.

This review is a part of the http://blog.blogadda.com/2011/05/04/indian-bloggers-book-reviews" target="_blank">Book Reviews Program at  http://www.blogadda.com">BlogAdda.com. Participate now to get free books!
scribbled by Ganga Bharani (GB) - November 28, 2011