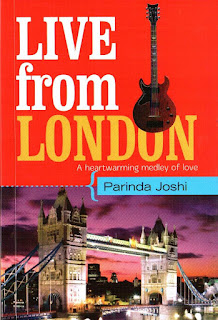 I just completed the book and here I am typing the review of it; fresh and green. 'Live From London' by Parinda Joshi was truly a page-turner, I should say.

I loved every wee bit of the book right from the stylish cover design with my dream destination; the London bridge. All of us have a fascination for it right from the days we learnt the rhyme 'London bridge is falling down...'. The red guitar on top of it, added to my thirst to get hold of the book.

Now over to  the plot:
The story revolves around an ordinary Indian girl Nishi living in London. She tries her luck with singing in a TV show as a casual challenge and ends up getting embarrassed. Just like how all of us get aggravated and motivated when we fail in something we are actually good at, Nishi takes up singing seriously. Nishi falls for Nick, a runner-up in American Idol. The book is not just about Love. Her relationship with her friends Zac, Sarah and Riya adds a different raga to the song.
Nishi joins Hues as an Intern. Nick signs contract with the company for his first musical album. They meet up in a party and later in a meeting where the duet between them starts. They fall in love and Nick earns her a chance to sing two numbers alongside him in his debut album. Nishi's dad gets transferred to India and she gets to live alone in the city of London. When we start guessing the next chapter there enters an already-celebrity Kelly . She records her debut album with Nick and so does Kelly. Talks about Kelly and Nick disturbs Nishi. She breaks up with him. She gets spotted with him in a public place and gets terminated from the company. She flies back to India where, with the help of a friend Arjun, she gets a new life; new beginning. She enters a contest in india, fails in it. The rest of the book is about how she builds up a new life in India, whether her debut album gets released, if Nick, her love, comes back to her. The ending of the book will surely make you smile.


Indian Way of looking at it: If love and friendship ragas up the book, it is the determination, challenge and victory of Nishi towards the end that 'thala's it up.
Disappointment: I thought the book would be completely about love but love has a very small role to play in the book though it follows the story from London to India. Few chapter in between were a little draggy but the interest caught me up as the chapters moved.

Bottom Line: 'Live from London', truly a medley of love.


You can follow the author of the book, Parinda Joshi, HERE
What are you still waiting for? Order the book and i'm sure it worth the buy.
This review is a part of the Book Reviews Program at BlogAdda.com. Participate now to get free books!

Thanks a lot Blogadda for giving me a chance to read this wonderful book.
scribbled by Ganga Bharani (GB) - October 17, 2011